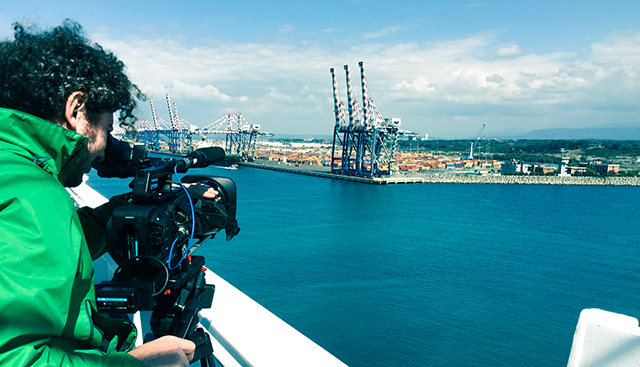 On location: Shooting ‘Freightened – The real price of shipping’

Jordi Esgleas Marroi tells us about his job as DP during the shooting of ‘Freightened – The real price of shipping’, a documentary directed by Denis Delestrac about shipping, international trade and its impact in our lives.

Earlier in 2015, the French film director Denis Delestrac contacted me to join him in the shooting of a new documentary he was working on. From what I understood the project fitted me like a glove: a film about international cargo shipping; which means boats, really big boats.

After reading the script, I realised that the scope and ambition of the film were much wider than I had initially imagined; to tell the story of this global industry we were going to have to travel far and wide, just like the huge freighters we would be shooting and the people who crew them. I was more than happy to assist, especially when the project was well backed by a group of prominent producers.

When the time came to start shooting I took a break from my editing stint at the Volvo Ocean Race and joined Denis in a two-month journey tracking the main players, locations and issues that make this industry such a vital but invisible part of our lives.

We started with an interview in London that shed some light into the links between the Sierra Leone civil war, blood diamonds, Liberia’s flag of convenience and the United Nations.

A few days later we were in Barcelona’s cargo terminal ready to board the ‘Puelche’, a 300-metre cargo ship; that’s roughly three football fields covered with cargo, that can carry over 3000 containers and which flies, unsurprisingly, Liberia’s flag.

We spent 10 days shooting on board ‘Puelche’, a job made slightly easier by the fact that we were allowed access to every single corner of this massive floating city, from the engine rooms to the bridge. The ship is run by a crew of 20 people comprising officers and sailors, the former being mostly from the Philippines and on 10-month contracts during which they don’t get to see their families at all and have very few opportunities to talk to them.

It was an amazing and unforgettable experience and once again I realised how fortunate we are if we get to sleep in our own beds, at home, close to the people we love for most of the year. Some people don’t have that choice.

Here is my personal photographic summary of the journey we made to shoot ‘Freightened – The real price of shipping’: In a boat that is roughly the size of three football pitches there’s room for at least one basketball court. This is where we shot a match between the crew. Photo: Denis Delestrac.

Our boat trip around the Mediterranean was followed by a plane trip to New York and a 12-day tour of the US East Coast that took us from New York to Delaware and Washington and back north to the outskirts of Newark. The Big Apple from the plane.

Our next stop was Panama City, where we crossed the 77 km canal that connects the Atlantic and Pacific Oceans in four hours. As far as marine traffic is concerned, this is one of the world’s most congested areas; its long due expansion was still underway at the time but has just  been completed.

Panama City reminds me of Miami, with its skyline carefully outlined by shady money. I felt more at ease with the people from places such as the dangerous San Miguel quarter than when dealing with the Canal’s authorities. Panama City’s skyline as seen by our drone. In one of the Canal’s locks with director Denis Delestrac. It took us over four hours to cross from the Pacific to the Atlantic.

From Panama we went to Manila, where the crews from most of the world’s cargo ships are hired. Filipinos offer the cheap contract labour that sustains our consumer society. We went to the north of Manila to visit the family of one of the sailors we met on the ‘Puelche’.

Back in the US, we headed to Boston and I was in for an unexpected treat; one of the best rewards this job has to offer: meeting extraordinary people. This time the opportunity came in the form of an interview with Professor Noam Chomsky at his MIT office. With professor Noam Chomsky in his MIT office after the end of our interview. Photo: Denis Delestrac.

Our last stop was in Vienna at the United Nations Office on Drugs and Crime where we interviewed the people responsible for the Global Maritime Crime Programme. This unit monitors and screens cargo shipping in international waters which fall outside the jurisdiction of individual countries. Anything you can possibly imagine they’ve found it inside a container, including live animals, drugs and other illegal substances, conventional and nuclear weapons, animals and even human beings.

‘Freightened – The Real Price of Shipping’ premiered at the San Francisco Green Film Festival in April 2016.

Find out more about ‘Freightened – The real price of shipping’

Catch a screening of ‘Freightened’: