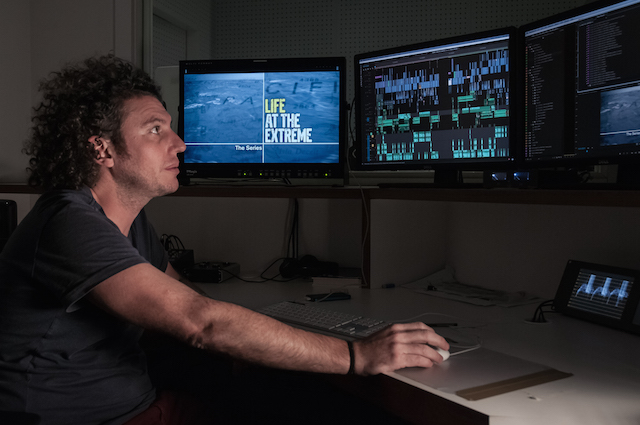 Jordi Esgleas is currently living in Alicante where he moved in September to join the Volvo Ocean Race TV production hub as one of the editors of the 30’ ‘Life At The Extreme’ weekly round-up TV programme. “It’s been tremendous, a lot of work and very long hours, but a great experience as well and definitely worth it but I can’t help thinking that I’m on a campaign of my own here… at least on the boats the sailors get 4-hour shifts followed by 4-hour breaks! Here we don’t have such luxuries – I think next time I might try sailing instead!”

For this race the role of the onboard reporter has been enhanced and there’s been no shortage of footage with plenty of stories pouring in every single day and feeding a constant stream of content that keeps us up to date on the most important developments happening on the water and on shore. For those of us who are really interested, there’s a lot to keep us distracted from our work, especially if we’re subscribed to the VOR YouTube channel that airs the official race footage.

So what is the appeal of a weekly TV programme when all the stories we want to know have already been told elsewhere? Well, for starters, regardless of the continuous buzz around online media, TV still comes on top as far as media impact is concerned and that is still where all the sponsors want to be. “That is definitely an issue, of course,” says Jordi, “but there are other things the programme aims to accomplish. For me the most important is to make sense of all the information and footage we get every day, sift through all that and tell the story that connects all those seemingly unrelated dots.”

According to the VOR blurb, the series is about “a bunch of people stuck in [sic] a boat facing mother nature [sic] and trying their upmost [sic] to be the best of the best under the watchful eyes of their own onboard reporter…” But it’s obviously meant to be much more than that. It’s the flagship show: a programme that is referred to as the ‘Human Edition’ and is broadcast by 100 channels from around the world and the vehicle for the VOR to reach most of its fans.

So far we’ve seen seven shows and Jordi is currently working on the eighth, which will be wrapping up soon. All of them highlight the human aspects of ocean racing, focusing more on the adventure each sailor is undertaking than on the sport itself, which is covered in other content formats. A normal day at the office. Photo: Carmen Hidalgo.

“The programmes don’t follow a strict chronological timescale. They tend to have a geographical approach: we had a show about the Mediterranean and another about the Doldrums. In the sixth episode we talk about what happened from Fernando de Noronha to Cape Town.”

For the sixth episode, ‘Hunting for Azzam‘, for instance,  the editors had to sift through some 350 minutes of footage, since each boat sends out 5 minutes of images a day and there were 10 days to document. “Our editing team has two people, one takes care of the online processes such as colour correction, sound mixing and editing the different versions of the show (Red Bull TV, NBC) while the other editor focuses on telling the story.”

The online editor also contributes to the storytelling, for instance, for this show he edited six minutes whilst Jordi edited the other 20. “I always have the same amount of time to finish the programme: five days. In this case, more than two were spent looking at all the material and making the compilations to be used in the editing stage. This left me with less than three days to tell the story of those 10 days of racing – it was quite a challenge but I’m very pleased with the result. We’re always racing against the clock here, a different kind of race, I guess, but sometimes the adrenaline runs pretty high too.”

You can watch ’Life at the Extreme’ on the VOR website, VOR YouTube channel or on one of these TV channels.

Background: ‘Life at the Extreme’ is a weekly documentary series of 30’ programmes produced by Sunset + Vine which follows the 7 teams competing in the 2014-15 Volvo Ocean Race for a period of 40 weeks. The production team is based in Alicante and headed by the company’s specialist sailing unit, Sunset+Vine|APP, with Leon Sefton, producer and François Gandolfi, director.